‘Conflicting messages’ on safety are preventing parents from encouraging their children to walk or cycle to school, according to campaigners.

A survey by Sustrans and the Scottish Parent Teacher Council (SPTC) found 42% of parents felt safety was a barrier to travelling actively to school.

The survey asked 1,232 parents, who were engaged with the SPTC, how their children travel to and from school and why they travel in this way. 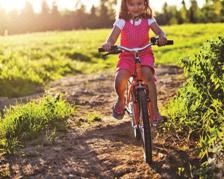 The survey showed that just 3% of Scottish children cycle to school and 2% scooter, whilst but almost half walk.
Eileen Prior, executive director of SPTC, said: “Parents often get conflicting messages.”

She added: “They are expected simultaneously to be responsible for keeping their children safe, for ensuring they are fit and active, and very often, for getting to work on time.

“These pressures often lead to a vicious circle of competing imperatives. For instance, we know driving too close to schools to drop off children actually creates danger in many ways.”

Of those questioned, almost half (42%) said safety was a barrier to their child walking or cycling to school, followed by a lack of cycle routes (29%), too much distance (22%) and not enough time (17%).

Parents said safer walking and cycling routes and slower traffic speeds were most likely to encourage active travel but convenience is still the main driver of travel choice.

Lynn Stocks, acting head of behaviour change at Sustrans Scotland, said the survey confirmed what they were already hearing anecdotally from parents and teachers.

“Increasing the number of pupils travelling actively to school is a simple way of providing children with the moderate intensity of exercise required every day,” she said.

“However it is clear that as long as parents feel that these journeys are not safe, they will be unwilling for their children to travel actively.”